A downloadable BotMod for Windows

Do you know EGGNOGG+? No? Then get it HERE!

So I made an AI opponent to play singleplayer!

1. Just Download the original game and my Mod
2. Execute both
3. And Play!

If you have troubles setting it up, you can watch the video I made.

I would be glad for some feedback :) Or even a video how you play aginst it!

Hi, I love Eggnogg but I can't get the AI bot working. It seems it latched on the input, but the other player stays still all the time anyway. :'(

Hey, so one character is becoming the AI and moves and the second one is not moving?

Or are both not moving?

Have you changed the input for the AI how it says in the console window?

I can control my dummy, but the other (the one supposed to be controlled by the bot) doesn't move.

Yes, I did reconfigured the keys, tried with both player 1 and 2 as well etc.

By the way, I've been always thinking: why don't you talk with Eggnogg's developer? It would be nice to have the bot integrated into the original game.

Moreover, that way this kind of problems won't even exist.

Hey, I have just tried it on my PC and it works for me. Did you activate the Bot by pressing "F4" while inside the game? To disable it again you can press "F6" (by the way it only works for the first map).

The developer is aware of this project. That time he was busy working on "Death Road to Canada". Since Eggnogg is a free game and he probably needs money, he prefers to work on a project which can be sold. I mean there were also plans for eggnogg to release "eggnogg rumble" and it was already far in development and almost ready. But still, it is not released. Since 6 years, no updates on eggnogg.

And I totally agree. For me, I love eggnogg and played it a lot in university, so I created this bot for a university project. And yeah, it has issues and could be done better, but investing more time into it just does not make sense right now. When you have a choice to work on something bigger which may bring you money later and more people will play it, or a free to play project like eggnogg which has rather a smaller community and is basically already a finished project, and to just work to improve it. You are probably going to choose the first.

And yeah integrating the project into eggnog would probably require some time, since the way I am controling hte bot is really hacky, by reading out bytes from the memory and simulating key presses. Plus the bot does not really see the map, so that should also be coded in. It all takes time :D

Thank you very well for your support. I probably pressed F4 inside the bot window, not inside eggnogg. I'll try that at the next occasion and revise all optiones you gave me.

Again, very thanks for your attention.

you have fixed the thing of the maps right?

Hey, sorry for the late reply.

I have not fixed the other maps. It only works on the first map.

The reason is, that I was not able to read out the actual map elements. So the bot is basically blind. What I did though was marking some key points, like where to jump and where not to jump, so the bot has some awareness of the surrounding :D

I guess the bot will stay as is, because I do not plan on continuing with this project :)

Hey, it will most likely not happen :/

for the linux people, it works with wine, you just need to be also running the windows version of eggnogg+ with wine

how to do it on itch.io launcher?

Hey i did not check if it works. You cant download it from there? I will see when i have time what the problem is.

The problem is the 32 bits thing. Anything i could do?

Hey, I think i deployed a 32 bit version.. which error did it show exactly? Is a dll missing? If so, which one?

it only says that it's not a valid 32 bit executable. Is this 32 bit version different from this one here to download on itch.io?

Like, i don't think windows xp should be a problem. Should it?

Okay, so I have just updated the file. Hopefully now it will run on XP aswell. Could you try downloading it again from my page?

Yeah man it now worked. Good job and thanks. Sorry for the little time lost to fix that but thanks

Ah no bother :) glad ot worked now. Was also something to learn new for me!

For me christmas was a week ago and i just got my laptop, good thing it was a windows laptop!

I have a Windows 10 laptop and it said that the file contained a virus and that it was severe. Does anyone have any idea why?

Im not completely sure. It may be that I'm accessing your keyboard to simulate keypresses. Or because I'm changing values in the RAM of another program (eggnogg). Maybe I'll try to build it differently and see if it still recognizes it as a virus. Do you have Discord? You could join the group and I could send you the exe to try out. https://discord.gg/NADW9Cd

But this exe on itch you can execute without worries.

Hi! Can you send the invite again? It expired and i'm having the same problems.

Hey, that discord channel did not last long haha it's not active at all anymore.

What I wanted to try on the discord channel is, that sometimes antiviruses mark programs more likely as viruses if they were downloaded from the internet. I wanted to send it directly or something. But that did not help.

The program will always be recognized as a virus because I'm reading out the memory for the position of the players and probably because I'm also simulating keypresses.

I'm not aware of how to avoid that, so if you want to use it you need to mark it as an exception and execute it despite the warning.

hi will this be on Mac? just asking. any way love this idea great work bro

Sadly, I don't have time to build it for mac. I made the project open source, so if anyone with a mac would want to make a build, they can :)

Awesome work man! I've been searching for something like this for a long time. I played with it a little and I have to say it's a pretty decent bot. The sword skills are good. Though it's movements are a little meh. Sometimes it gets stuck in places. And from what I saw it can't throw swords.

Could you tell me how you made this or possibly share the github page. I'm a coder myself and would love to help you add some more stuff.

Thank you a lot for your feedback! I'm glad you like it! Yeah I couldnt extract information about the map so I hardcoded it. Also he cant pickup the swords from the ground. But he normally should throw the sword hmm.

I'll open a discord channel. So anyone who wants to work on it write me in private and I'll send an invite!

And yeah I'll upload the code :)

Dont know how to write in private so write me on twitter :D https://twitter.com/b0rb0g

Edit: Let's make it public!
Anyone who has interest can join the Discord channel under https://discord.gg/nHkYT6P

can you make maps?

It's probably somehow possible with a lot of more hacking than I did :D But I don't really have the time right now to figure out how to do it :/

How did you like the AI? In case you played it.

Oh thanks a lot for telling me! I might have built the exe wrongly. Its a library and part of a redistributable which the program needs. I'll fix it tomorrow if I find time. Otherwise next weekend.

Ok, thank you so much

Hey, I should have fixed it. Please download it here again and try if it works now. And thank you for telling me :)

And yeah I'm answering from different accounts because I'm also the programmer in The Alien Sphere Thing game :D 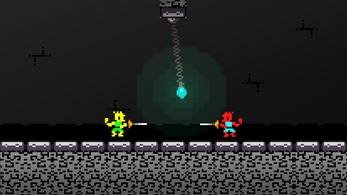 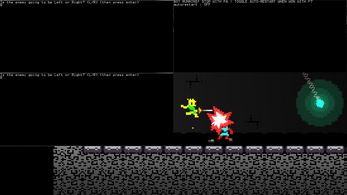